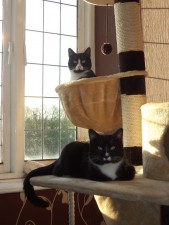 This is Cayo and Coco who we adopted from the Liverpool Cat Welfare in Huyton. they had been at the rescue centre for years -almost their whole lives. Because they were feral and incredibly shy they kept being overlooked and no-one wanted them. so we decided to adopt them.

This is Havana who we adopted from the RSPCA in halewood liverpool, he's so soppy and cuddly, loves his tummy tickled and sleeps in between us everynight.

This is Nevada who we adopted from the Cats Protection in Warrington, sadly his previous owner had passed away and being a black cat he kept being overlooked in the rescue centre so we decided to adopt him. he loves being stroked, sunbathing and drooling while he purrs

This is Francisco who we adopted from the RSPCA in halewood liverpool, he was originally adopted and kept being brought back to the rspca by previous owners because he was toileting around the house and scratching the furniture. who'd of thought it eh? a cat who scratches the furniture! well since weve adopted him he's never not been to the toilet in his litter tray and very very rarely scratches the furniture as he has a scratching tree in every room. he's only been with us since around march 2015 and is 95% settled -i think it'll be a while until he's 100%, he's used to being taken back to the rescue all the time so i dont think he realises that this is his forever home. 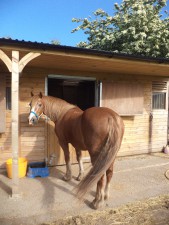 This is Harvey, he's 24 years old and ive had him since he was 4, he's semi retired now but does enjoy going for a little walk now and again through the fields 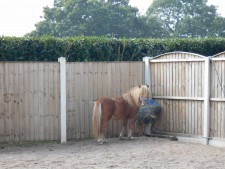 this is dexter who we adopted from the shetland rescue centre in Halewood, we adopted him when we moved here so harvey would have company, harvey and dexter are best friends, dexter idolises his big brother and follows him everywhere

We have 8 chickens and 7 ducks, -our chickens are dazzle, zarle, korma, tikka, nora batty, henny penny, sam and ella. and our ducks are crispy, peking, elaina, lucia, kirani, twix, and bugger. they have a large coop and run which they stay in at night or when its really windy, then during the day they free range in our back garden which is around 1/3 acre

As we live on a main road all our cats are indoor cats so we built them their very own adventure playground, we plan on adding to it each year 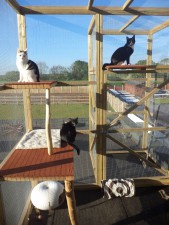 We also have a catio so they can all go outside to sunbathe, watch the birds etc